LEGENDS MAGAZINE, the title tells the whole philosophy of this high-end magazine. It tends to retrace the journey of people and objects that mark or have marked the world. All the mechanics, just the mechanics.

It’s an elegant sepia-titled and large format that sets Legends Magazine apart from other publications at first glance. The choice of the base color is not innocent. It evokes the film photos of the recent past and emphasizes without martyrdom the black and white images that illustrate the articles. The cover of the first issue dedicates two sacred monsters, Sean Connery in James Bond and his famous Aston Martin DB5.

Legends Magazine has a circulation of 6,000 bilingual French and English copies. The magazine is sold by subscription and distributed in the most prestigious hotels, in events related to the subjects, such as the Swiss Elegance Competition or the historic Ollon-Villars race among others.

They contribute to Legends Magazine ... 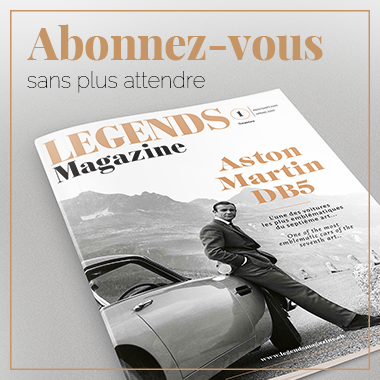